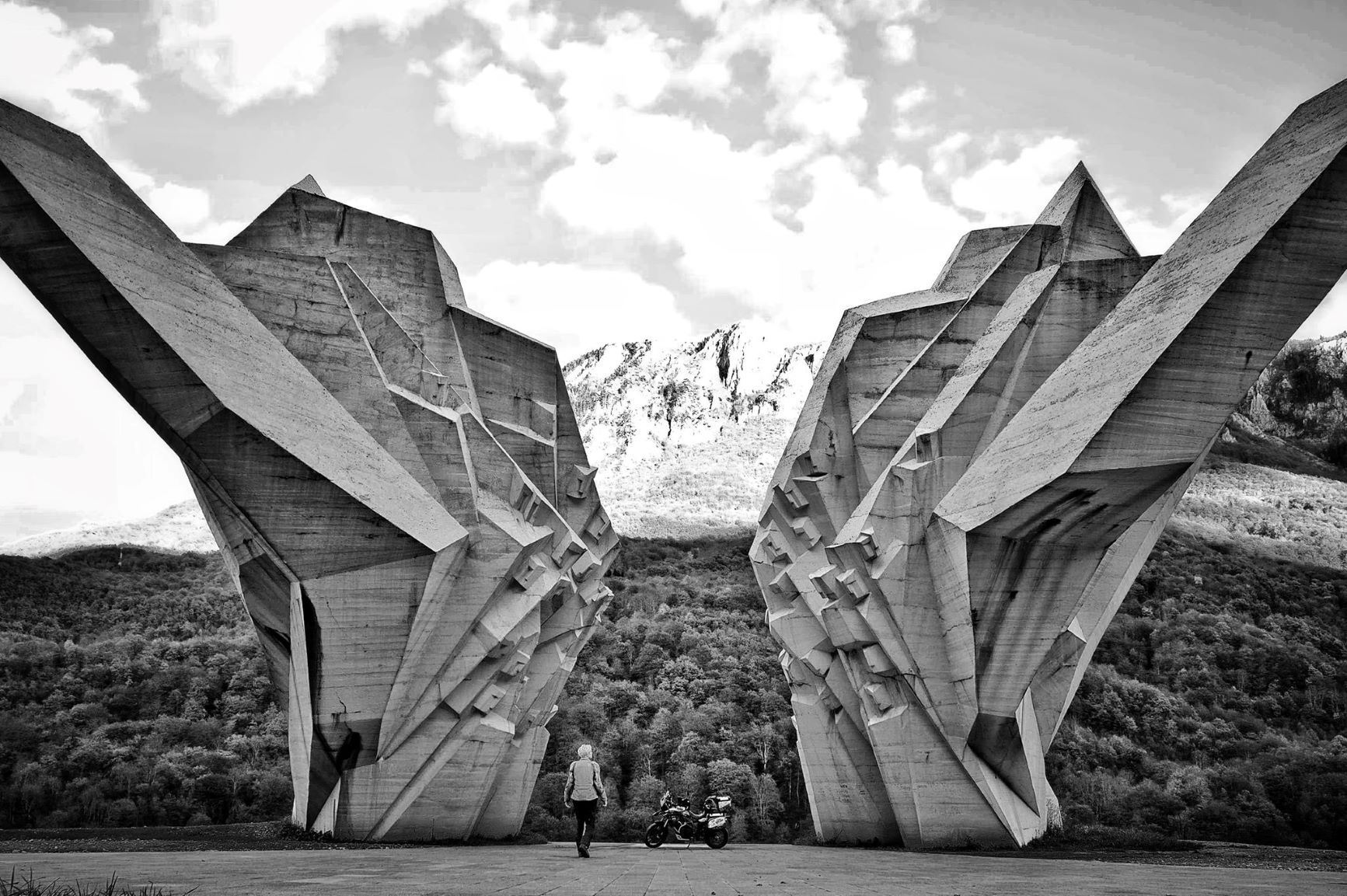 The Bosnian coast cuts into Croatia and is only 9km wide but still, I managed to find a magical place there. After being restricted by all the European rules for so long I was very determined to camp in the wild. And I finally found the most perfect place… sort of, in the wild! Ok, maybe it was a bit illegal too… I kind of, maybe, broke into someone’s property… but shh don’t tell anyone!

So I saw a turn off for a bar on the coast. There was a chain blocking access to the road, but the lock was unlocked so I considered that an invitation. I rode down the hill to find the bar…

The bar was just a basic shelter with a few umbrellas, I’m guessing people normally would visit this place on boats as the road access was quite difficult and steep and there was no space for cars down by the shore.

The view was too incredible for sleeping in my tent. So I unrolled my mattress under an umbrella and enjoyed the night sky, watching the stars until I fell asleep.

Unexpectedly finding such picturesque places are the best moments of being on the road.

The next morning I headed to Montenegro and then Dubrovnik for a few days and returned to Bosnia and Herzegovina a few days later.

My next destination was Mostar, a historic little town which is considered to be the unofficial centre of the historical region of Herzegovina. The name of the city means “Old Bridge” and is associated with the actual old bridge across the Neretva river. It was built by the Ottoman Turks in the 16th century and is included in the UNESCO World Heritage List. Destroyed during the Balkan War of 1992–1995 and restored in 2004, the bridge now symbolises the country’s return to civilian life. These days the bridge is an icon and many divers from all over the world compete in the Red Bull Cliff Diving World Series there. The divers challenge themselves to jump off the bridge into the fast running river below. When you’re on the top of the bridge you realise how mad and risky that is!

Miran from iHouse contacted me beforehand and invited me to his apartments in Mostar.

It was so nice to finally stay in a bed with clean sheets!

Miran is also a tour guide so I joined him and his customers from the US for a little tour around town. There were lots of sights to see and we all enjoyed the day immensely.

Thank you, Miran, for your hospitality and generous donation of your time.

After two days of rest I packed Chillie up and we were off again to see the rest of the country. I really didn’t feel like going through the major cities so I continued South through the more remote roads.

I stopped in the Dervish House, a Muslim monastery built at the bottom a sheer cliff face by the Buna River. A beautiful site.

The water in the spring is so clean and drinkable…. of course I had to taste it!

Later in the day, I made it to Sutjeska National Park . The ride through the park was such a blast. It was off season and there was nearly no one around.

And finally, there it was! A massive concrete monument in the shape of wings. Wow, this is just wow, I need to get up there! A little road through the forest got me to the monument. I parked Chillie in between the wings and just admired the grandeur of it’s size and shape. What a unique testament to history… The Sutjeska War Memorial.

Ok, now it’s time to find a nice place for my tent! I saw a sign for camping, but I knew it would be closed at that time of year and I was right… everything looked shut. Perfect! At the start, I thought I’ll just set up my tent but then decided to sleep on the table under this little shelter… just like the good old days in Australia!

It was late October so the temperature had dropped down to 2 degrees at night and the weather became unpleasant very quickly. It was too late to pitch my tent in the dark because of the rain and wind. It was so loud and the leaves were smashing into my face. Ok, maybe sleeping on the table wasn’t such a good idea after all but at least I was under some cover with my good gear that kept me warm. In the morning the weather had cleared up again.

On the way out of the country, I just admired the beautiful autumn scenes. All the leaves were orange and half of them already on the ground, it was very picturesque.