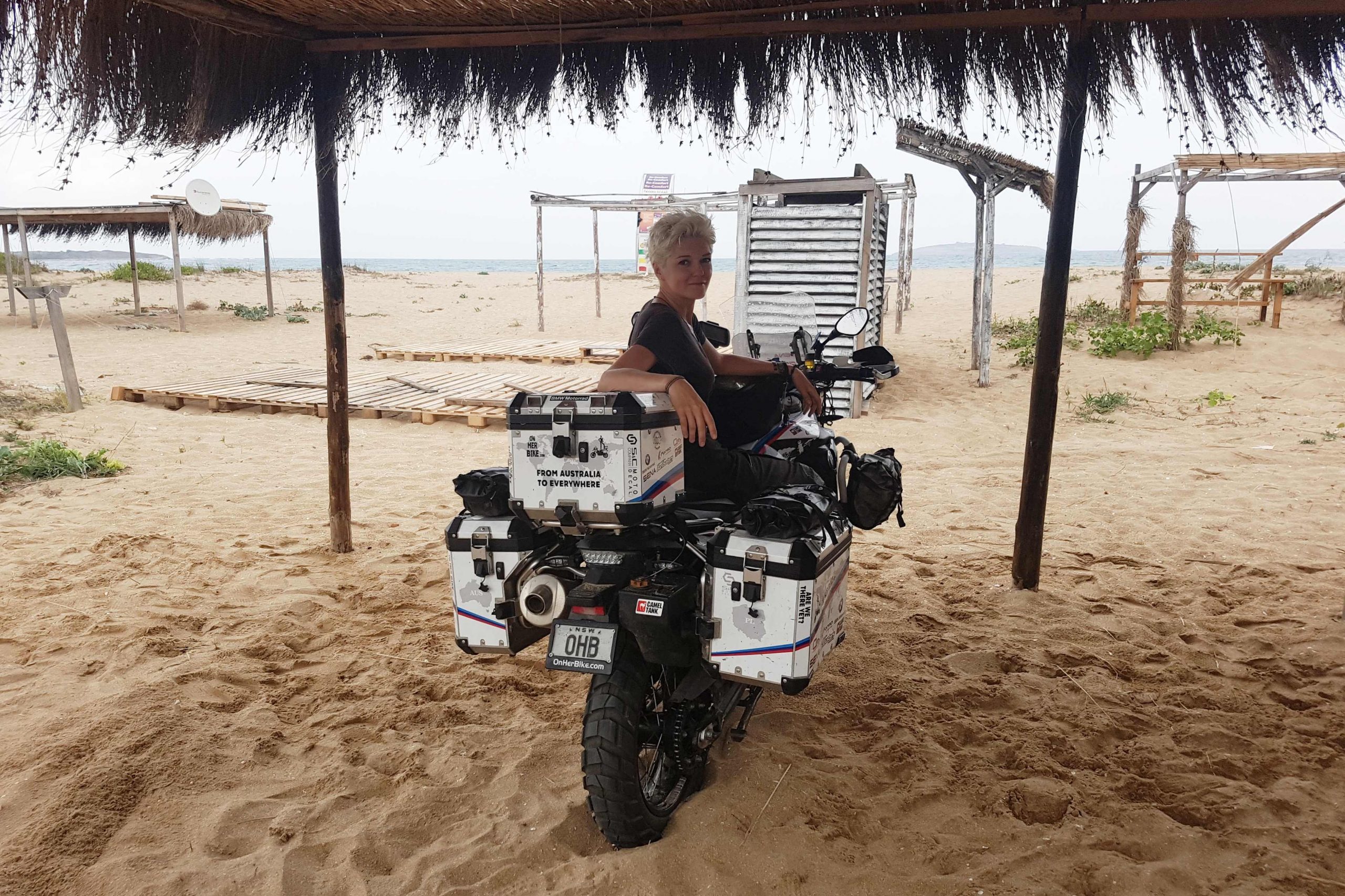 Although it’s already autumn and the weather has started to turn towards winter’s cold and rain, Bulgaria gave me the heart-warming opportunity to catch up with my old friend Gonzo who was waiting for me at the border in Mitnitsa Malko Turnovo. We gave each other a big hug – it’s been a long time since we’ve been riding together!

Bulgaria gave me a great sense of peace. It was quiet at the border, on all the roads and it was surprisingly quiet at the sea, but I guess tourist season was already over in October. We wandered along the cost searching for a place to camp. When we stopped to check out the coastline Gonzo asked me to strike a pose! Who am I to say no!

…and we finally found a perfect camping ground on the beach! Normally we would have to pay a fee for this premium location, but at this time of year there was noone at the gate to charge us.

For the rest of the afternoon we walked along the beach, had some beers and talked about the good old days.

…and in the morning I had a little bit of digging to do. As you do at the beach 😉

Over the next couple of days the weather turned bad – it was rainy, cold and miserable, but it’s not really a surprise – at the end of the day, it was autumn. I really can’t complain – it was my first rain since Mongolia!

Gonzo promised to show me a special place that’s located at the top of the mountain. We rode up in a thick fog, the temperature having dropped to 5 degrees, “If I knew it was going to be so cold I’d have worn my thermals, where the hell is he leading me to?!” – I thought to myself irritated while riding.

…but I must admit it was freezing, but mysterious and magical at the same time 😉

We finally arrived! “What the heck is this?!” I asked Gonzo…

All we could see was a concrete wall covered in graffiti. Above us was supposed to be the Buzludzha Monument, but the fog was so thick we couldn’t see a thing!

Here’s a photo from the “Interwebs” that I found later on. It turned out it is a pretty legendary place. The House-Monument of the Bulgarian Communist Party in the shape of a UFO. It’s a shame I didn’t get to see it fully, cause you know me and my concrete fetish…

Paste the photo, a credit and the link to the image’s page, that way you are safe.

There is another legendary place that is a must for any motorcyclists that pass through Bulgaria and it’s MotoCamp! This moto oasis is run by Polly, Doug and Ivo and it’s located in a small village called Idilevo which is a one of a kind here in Bulgaria. The reason for that is there are 24 foreigners living here and the majority mainly because, once they visited the MotoCamp they never wanted to leave. They bought houses and now live peacefully here the whole year round and treat MotoCamp as their local pub.

After a night at Motocamp, Gonzo had to head back to Poland…

In October MotoCamp is not so crowded, which is nice, but there were still few riders coming and going. One of them was Ivan from Slovakia who came all this way for an event held by BAG Balkan Moto Adventure & Touring Group. Ivan convinced me to go along with him – it was just 80km from MotoCamp so why not!

I said goodbye to Ivo and Polly…

…left my mark in the kitchen and off I went to socialise.

There were a few guys who’s stories I found fascinating. Dimitar has been on nearly every continent – he’s a Bulgarian and the real deal!

Eric from the USA also dropped in from Motocamp to say hi. Erik has been riding through North America, Africa, Europe and now he is on his way too New Zealand and Australia. He’s a very interesting guy.

All this time Chillie was kinda the centre of attention!

…and she nearly ran someone over, oops…

I was hoping to cross the border on Sunday but I was just tired and didn’t feel like riding any longer in the rain. After 6 months on the road I was experiencing more and more of these days. I was due for a good rest and I couldn’t wait until I got to Poland.

I Googled where the nearest hostel was in the area and it looked like there were a few in Veliko Tarnovo. Well, that means there is something going on in this town! And for sure it was! You probably know this weakness of mine by now – I don’t have time for research which sometimes frustrates me cause I miss out on awesome things along the way but when you ride into one of the best attractions a country has by total chance you just feel like you won the Lotto!

Veliko Tarnovo is one of Bulgaria’s oldest towns with very unique architecture. I stayed at the Hostel Mostel for the night and before I had my 15 hours of sleep I went for a little wander around town.. I’m telling ya that town is just stunning!

To cross the border with Romania I had to cross the Danube River and the closest ferry crossing was 80km away in Svishtov. I thought that the ferry would be operating quite regularly but it turned out I had to wait for it for over two hours. No worries it was time to have lunch anyway and it’s much cheaper to pay the 5 Euros for the ferry than to detour 100km from my route to go over the bridge.

After lunch I came back to the ferry on time. I drove on the big barge with the rest of the trucks and a few moments later I was in Romania…

The “Are We There Yet” World Tour is about more than just me seeing   the world on   a motorcycle. Throughout my journey I’m raising money for a young disabled child in Poland named Franek. Franek was diagnosed with cerebral palsy (weakness of the entire right side of the body) and he will require constant rehabilitation for the rest of his life. All the money raised will go directly to helping Franek and his family lead as normal a life as possible so please donate  generously:   www.gogetfunding.com/arewethereyet