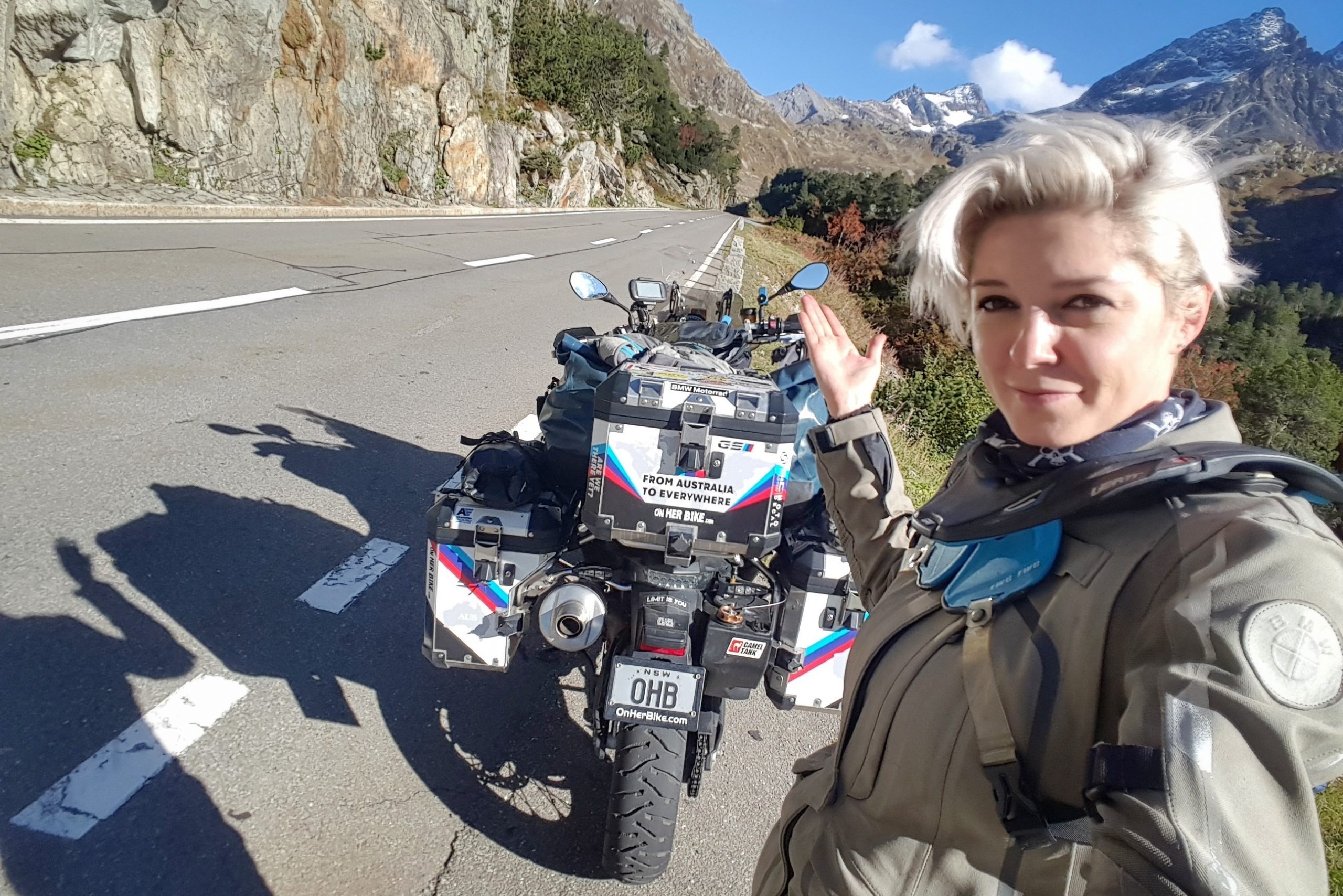 I entered Switzerland in October and I only had one month to explore my whole European route. There were 11 countries ahead of me before I reached Southern Italy to hop on the ship to Israel. So I had to be fast and yet wanted to explore as much as possible. My biggest concern was the weather – at this time of the year the weather can be quite unpredictable, especially in the Alps. But I got lucky and had the most perfect autumn ride…

I only spent two nights in Switzerland and two full days riding the mountain passes.

On the first night I was hosted by Andi near Zurich. Andi is a world traveller who I’ve been in touch with for a while now and we finally had the chance to meet up. This is the time where I say thanks Andi for your great advice. On so many occasions he has guided me through stressful situations and now I finally got to thank him in person. Cheers to Andi and his house mates!

After finishing a solo ride around Africa, Andi based himself in Switzerland and now he’s working for Lone Rider. For a while we’ve been talking about a perfect tent for adv riders that will meet the needs of overlanders. The outcome of Andi’s experience and researching is the Lone Rider ADV Tent, which I had the opportunity to see a prototype of on the night I stayed.

Until now I have been using the MSR Hubba Hubba and still think it’s a great lightweight tent but it’s too fragile. I’ve already had to fix pole splits a few times which was frustrating. The manufacturer stated that this was caused by the bike vibrating, which doesn’t make sense to me, but the fact remains it’s a very delicate tent, so I was desperately looking for something else. I was very impressed with the prototype Andi showed me, it felt tough, durable and it’s a bit bigger than the Hubba. It also has great little features designed especially for riders. The only downside is its weight, it’s 1kg heavier than my old tent, but I’m happy to pay that price for a more spacious and durable home.

A month later Lone Rider sent me one of their first models and I just couldn’t be happier with it, you can see more pics of it in my future post from Jordan…

As I mentioned to you in my previous post from Germany I had broken my leg, completely crushing my confidence and all the previous trauma of the head-on collision in 2015 came back to haunt me. Riding the Alps was definitely a highlight of Europe, but at the same time my stress levels were higher than the mountains. Luckily at this time of the year the roads were pretty empty, but still I was so frustrated with myself – I’m finally here and I can’t even ride my bike properly. The intense part of me (which is about 90%) was resenting myself for being weak and not enjoying these epic corners and the other tiny part was saying keep it cool, who cares if you’re going slow, as long as you’re going and you get to see it all. So yeah, the Alps was an internal battle with my fears and frustrations, but so worth it because the scenery was just breathtaking….

If I was a good blogger I would list the names of the passes, but kill me and besides I have no idea what their names were and there were too many of them. So instead I’m sharing with you these lovely pictures and the map below 🙂

On the second day I headed to see Lea Rieck and her friends who had got us a great deal in a 4 star boutique Guarda Val Hotel in Sporz. Yeah, that’s right – 4 stars! Experiencing such luxury especially in Switzerland wouldn’t ever cross my mind being on such a tight budget, but hey… how could I miss out on this opportunity, in such a beautiful location up in the mountains, with breathtaking views and in a cozy hotel with great company.

We spent the night chatting about bikes, as you do, accompanied with fine wine, cheese fondue and ice-cream. It just can’t get better than this.

In the early morning we said goodbye I headed towards Italy and Lea went back to Germany.

On the second day I felt a bit better and I was able to go a little bit faster in the corners, I tapped myself on the shoulder – “see you’re gonna be ok, just enjoy it”. The weather was unbelievable – 20 degrees in October, at 3000 meters above sea level! Just a prefect ride. There were plenty of passes again, so there are plenty of pictures. I’ll be back to Switzerland for sure!