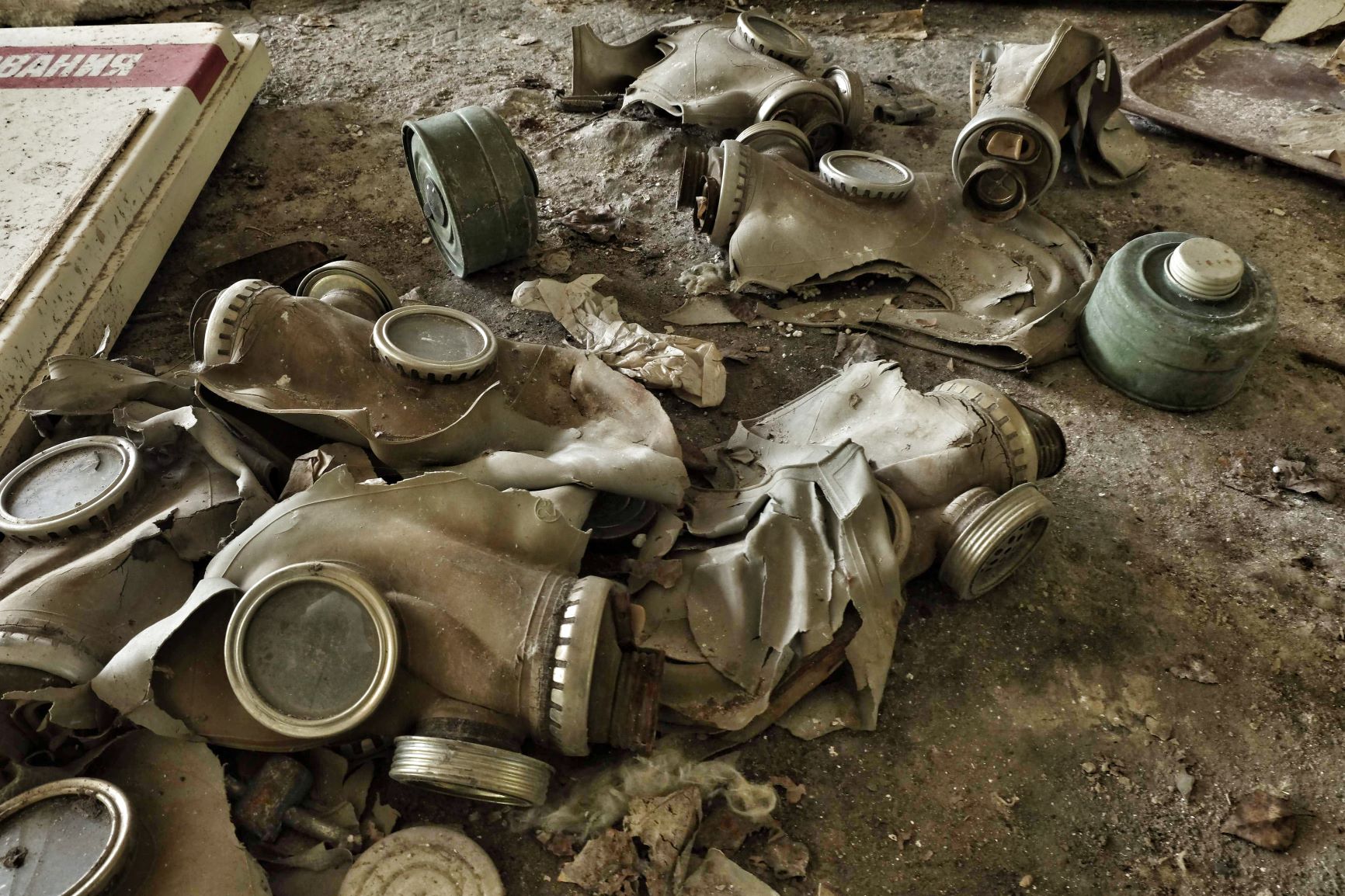 On 26th April 1986 the Chernobyl nuclear power plant in northern Ukraine (former Soviet Union) became the scene of the worst manmade disaster in the history of mankind. An explosion at the plant was the result of a poorly designed experiment on reactor unit 4 conducted by inadequately trained personnel who wanted to see if the reactor’s turbine could run the emergency water pumps on inertial power. During this test engineers disconnected the reactor’s emergency safety systems and its power-regulating system and made a series of mistakes which led to the explosion. The accident and the fire that followed released massive amounts of radioactive material into the clouds above Ukraine, that later fell as rain across Europe and as far away as Norway, Wales and Ireland. This released radioactivity was several times larger than the atomic bombs dropped on Hiroshima and Nagasaki.

Photo Credit: The Handy Science Answer Book, compiled by the Science and Technology department of the Carnegie Library of Pittsburgh

Emergency crews responding to the accident used helicopters to pour thousands of tons of boron, dolomite, sand, clay and lead compound over the exposed core to stop the fire and the release of radioactive material. Later on the building was enclosed in thousands of tons of concrete. However over time the concrete started cracking and radiation was leeching out into the atmosphere again. In 2010 the construction of a New Safe Confinement structure commenced – this time it was made out of steel. This is how it looks today…

The death toll of the Chernobyl disaster remains very difficult to calculate due to the widespread fallout. Officially the statement is that 2 men died from blast effects and a further 29 firemen died as a result of radiation exposure in the following days. These days stats estimate that the Chernobyl disaster affected the lives of over 600k people causing premature cancer deaths as a result of radioactive contamination and exposure received from the incident.

During the time of the explosion I was living in North Eastern Poland and I was 5 years old. The only memory I have from that period is that we weren’t allowed to play outside and we had to consume Lugol’s iodine (solution of potassium iodide with iodine in water). This tragedy was always in the back of my mind and it made me wonder what effect it had on us. Maybe the fact that nearly everyone in my family dies of cancer is related to this accident as well.

Throughout the years I developed a little obsession with this dark period of history and for years I had held a desire to visit Chernobyl, 32 year after the explosion I finally made it there.

How to get there?

I knew that access to the Chernobyl exclusion zone is restricted and it would be very unlikely I could get there on the bike, but I thought I’d have a go anyway.

I crossed the Belarus/Ukraine border in Slovechno – this is the closest border to Chernobyl open to foreigners. My GPS showed a nice shortcut going along the Belarus border. The road was so quiet and peaceful, I love riding these type of roads.

Soon after that the road turned into gravel. Hell yeah! I thought.

And soon after that into this. I’m not sure how to describe it, maybe something like: road with lots of holes and not much pavement. As it turned out later Ukraine has lots of these types of roads here and your average speed is much lower than in other countries. An ADV bike is the best choice here.

Unfortunately a few kms later I faced the first army checkpoint of the exclusion zone. Although Chernobyl was still over 100km away the road along the border is closed to the public. It turned out it’s a closed zone which is only accessible to the army, temporary workers who still work at the plant and a small number of villagers that the Ukrainian government allows to live there. I had no other choice but to turn around and head back onto the main road to Kiev.

Soon after I returned to the main road, there was another checkpoint. The soldier advised me that this is the transit zone and I’m not allowed to stop until I reach the second checkpoint. Roger that!

This is serious stuff! I totally need to stop on this road to get some pics, hehe! The moment I saw these creepy looking flats I thought – this is perfect! I turned into a heavily overgrown driveway and I stopped my bike at a place where I couldn’t be seen from the road. I felt goosebumps. It was a really creepy moment to be alone next to this abandoned building. I took a picture and headed to Kiev.

The only way to visit Chernobyl theses days is to go on an organised tour. Well, I mean that’s the legal way. Apparently there are regularly some thrill seekers who break into the exclusion zone and walk 30km to Chernobyl through the radioactive forest. I’m not sure why – maybe it’s a cool thing to do for people who like to live on the edge, but as a matter of fact it’s very risky! The exclusion zone is a lush forest with a lots of wildlife, but if you weren’t aware of it, there are still lots of radioactive hotspots and you could wander right through them exposing yourself to dangerous levels of radiation.

There are plenty of tour companies in Kiev which offer private and group tours. I went with Chernobyl Exclusive Tours, I booked with them online for a cost of US $78 including lunch. Chernobyl is 140km away from Kiev so the whole tour including travel took us about 12h.

We met at 7:45 am at the agency for registration. The organisers offered protective clothing for an extra fee but also said it’s not necessary as we will be only exposed to low levels of radiation. Renting a Geiger counter was also available for $10.

On the way there on the bus, we watched a BBC documentary which was very educational and gave us a lot of background on where we were going.

At the Dytyatky checkpoint which is 30km from Chernobyl and the only entrance for organised tours, we had out passports checked. Out Tour guide advised us not to consume any food outside, not to touch any objects and always follow his instructions.

We stopped a couple of times at the villages to see the abandoned houses, apartments blocks, schools. During the evacuation inhabitants were allowed to take only necessary items with them, as they were told that they would be able to return in a few days. This information was released to avoid panic and to stop people taking too much luggage with them. Later, the authorities decided that no one was allowed to go back to the restricted zone ever.

The most overwhelming place for me was the kindergarten. When you see all the kid’s belongings it really hits you – someone played here and they were my age!

Radiation in the majority of places we visited was at natural levels of 0.3 μSv / hour and inside buildings it was especially low. But the guide also showed us hotspots, the highest reading for a hotspot on the ground was around 20 μSv / hour.

This is the Duga-3 radar system, nicknamed “The Russian Woodpecker” – one of the coolest sites I’ve witnessed. This big antenna was used for the early detection of missiles and over time speculation grew that it was being used for mind control and weather experiments and got the name “The Eye of Moscow”.

The Duga-3 is also one of the reasons why people break into the exclusion zone – they just want to climb it so they can see the view. Unfortunately after a few deadly accidents all the ladders have been cut off to prevent people from gaining access.

Though Chernobyl is the site of the nuclear disaster, it wasn’t affected as much as the neighbouring town of Pripyat. These days radioactivity in Chernobyl is within normal ranges and surprisingly the town is still inhabited. There are around 2500 shift workers, who still work at the plant, living in Chernobyl.

The town of Pripyat gets the largest amount of tourist attention. It was established in 1970 to accommodate workers of the Chernobyl plant. Nearly 50k people lived there at the time of the explosion. Pripyat had all the luxuries of a modern city – a railway station, port, hospital, hotel, cafes, swimming pool, cinema and theatre. And now it’s a wasteland which nature has taken over. It’s hard to describe the feeling of being there and imagining the people living their lives, completely unaware of the disaster that was about to occur.

This Fun Park was to be opened for the first time on 1st May for the May Day celebrations, but the explosion occurred 6 days earlier…

And finally this is reactor 4 these days. On the day it measured over 1.2 μSv /hour which is not too bad considering what had happened there.

After the explosion the operation of the plant continued within the three other reactors and they continued producing electricity for 14 years. In 2000 the power plant was shut down completely and the Chernobyl facilities turned into nuclear waste long term storage, costing the European Commission €27 000 000. It will take another 28 years before the radiation at Chernobyl drops to acceptable levels, and it will take over 40 years until the Chernobyl facilities and debris can be dismantled and safely bunkered.

This experience was one of the most unforgettable of my life and the only regret I have is that I didn’t do the two day tour. The day was well organised, we manage to see all the most important and interesting places and buildings. The organisers confidently state that during the one day spent in the Chernobyl exclusion zone the body receives a dose of radiation comparable to the natural background radiation found all around us, which is 300 times less than a whole body X-ray scan and roughly equivalent to a short plane flight. At the exit we were scanned for radiation and if your clothing showed high levels of radioactivity you would have to leave the site without them!

This dark period in history from a human and scientific point of view is hopefully a lesson that will never need learning again and one that has shown us the devastation that can occur as a result of mankind’s arrogance and why it should always be kept in check.